Last week Mark Ruggiero asked if anyone had actually played the full Guderian’s Blitzkireg II/Case Blue Campaign, and I mentioned that I had just started the game on Vassal, with the Oct 1, 1941 start. I am playing the Axis and finally finished my first move. If all the turns go like this, actual play time will be somewhere in the vicinity of 5-6 years. 😊 That won’t happen, of course, since mud could possibly make its appearance in 3 turns

Anyway, I have sent the forwarded the vlog file to my opponent, so I will have a bit of a wait myself. Here is my situation after my move. Pictures are in order, North to South.

1) Velikiye Luki and north – Moved some stuff around Demyansk. Will likely move SS-T out of the area and send in another Infantry division or two. Hoping that this area remains quiet, but preparing for anything. 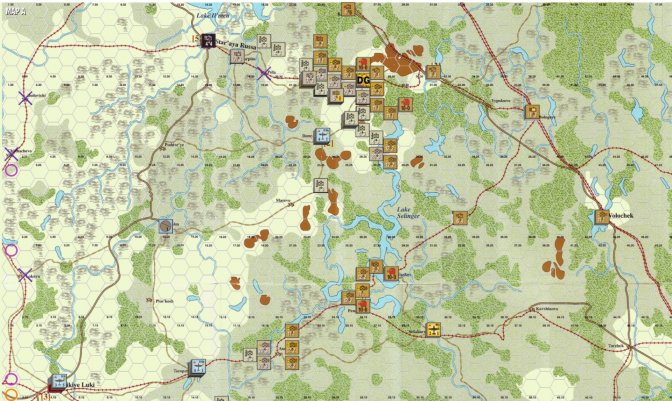 2) Smolensk area – The 3rd Panzer Group has 2 short term goals. The first is to trap as many Russians as possible at the line in front of Smolensk and make them disappear. Did pretty well here, and it looks like there are about 11 Divisions now behind my lines from that move. 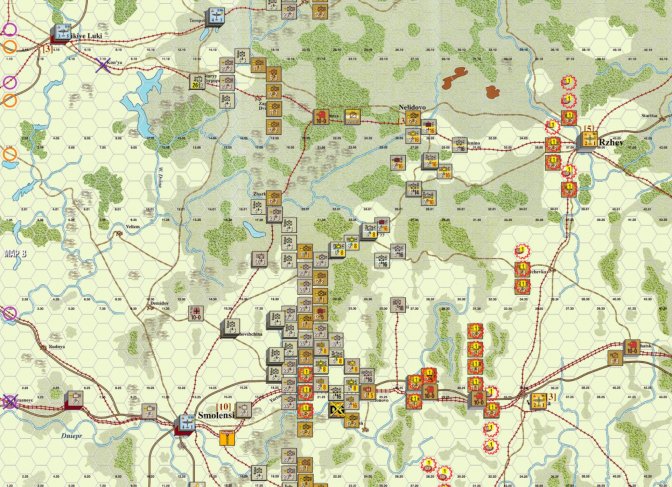 The second was to rush towards Rzhev and cut the rail line to Nelidovo. Also worked well, and there are 7-8 divisions that could be trapped.

I will have to see how many units go away, and how my opponent reacts. Next goal, Rzhev and Vyazma.

3) Roslavl area – The 4th Panzer Group will be used to cut off more of the Russian front, head towards Taluga, and assist 3rd Panzer Group in the drive to Moscow if need be. The initial results were an overall success. I was able to take Spas Demyansk and cut supply to 14-15 Divisions. My opponent will have a real hard time getting them out of there, though the pocket is pretty loose at the moment. I was also able to capture 5T in supplies at Spas Demyansk, always a bonus.

This group will continue towards Taluga, but it is imperative that the Taluga/Bryansk rail line be cut. Still trying to figure out how I will pull that off. 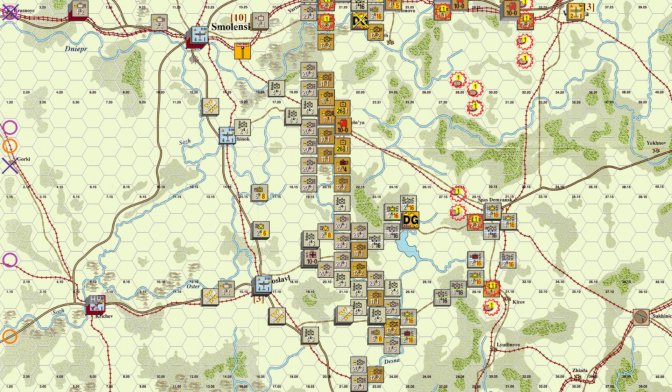 4) Guderian’s Blitzkrieg – 2nd Panzer Group is tasked with taking Tula and ensuring Bryansk is isolated. The move toward Orel was a rousing success, the move toward Bryansk by the 17th Panzer, not so much. I was unable to take out the Russians sitting on the railroad, but did trap 4 division there. Depending on what my opponent does, at the very least I should be able to cut the Orel/Bryansk railroad, and possibly take Orel. I will be able move beyond Mtsensk and stay in trace supply up until the freeze comes and my trucks start to disappear. I should have alternate sources of supply by then (maybe). 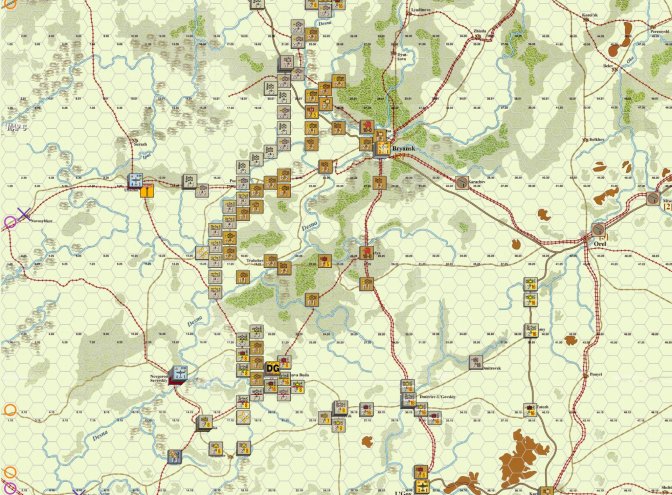 5) Kharkov and Dnepropetrovsk – Kharkov is going to be a pain. The infantry will take time to get there. Lots of stuff in front of my forces and little supply to spare. The problem is, I have to take it, one way or the other. I will slog along.

As for Dnepropetrovsk, it should clear out after this turn, freeing up some of the troops there to make a dash east and to assist in the Kharkov endeavor. Unfortunately, not being able to put a railway bridge across the Dnepr until November kind of puts a damper on the dash. Oh, and I also have supply issues (shocker). 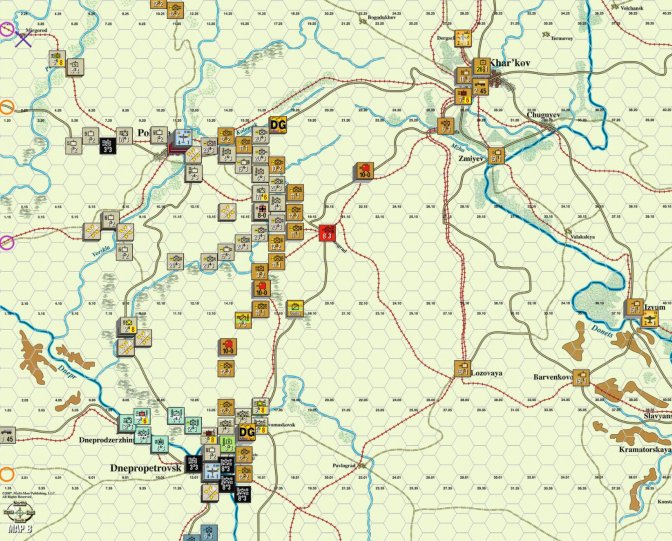 6) Crimea – the scene of my most disappointing reversal. I was not able to crack the hog line on turn one, and I have few troops and fewer supplies (??!!!??). I just can’t let the Russians really fortify the area, so the sooner I get one of the hexes taken, I will be in better shape.

As for the mad dash towards Rostov, getting my troops in position to begin the trek, with Mariupol as the interim goal. The ONLY thing I have going for me here is the Russians don’t have much to get in my way, not that it matters much 😊 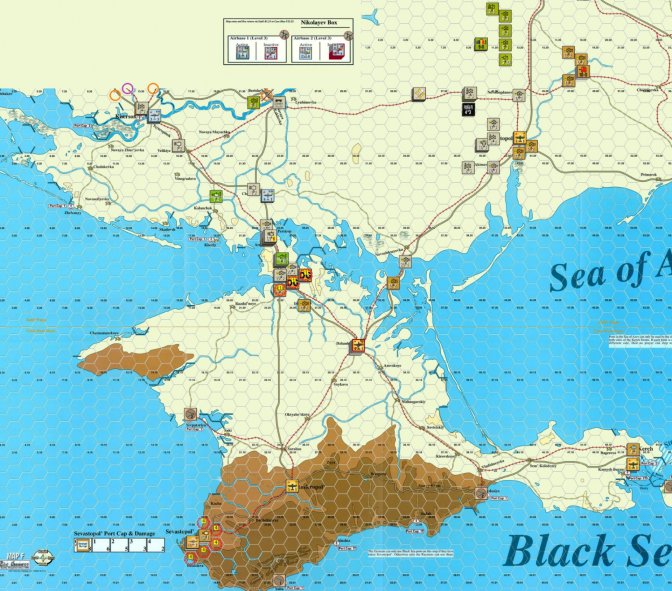 The big cost was supplies to move everything. I ended up spending 25 SP, of which 16 SP was used to move mechanized stuff. The failed attack in Crimea cost me 5T alone, and the infantry attack in front of Kharkov cost me another 5T. I used most of my air force for hipshots/fighter sweeps. To refit everything next turn will cost 6T. The good thing is I don’t have to move quite as much next turn, and I got a lot of my infantry in a position to move forward to engage the Russians.

Final comments: Still wondering if I bit off more than I could chew with all these panzer division leaps into the great unknown. I know my opponent will not be as inept as the Russians really were, so I will have to see what he does. I am already dreading mud and winter and trying to keep my army as intact as possible.