Here is the situation at the end of turn 2 of the full Guderian’s Blitzkireg II/Case Blue Campaign October 1, 1941 start.

1) Velikiye Luki and North – Pretty much nothing happening. The camping and nature trails are wonderful in the fall! A hint of winter though. 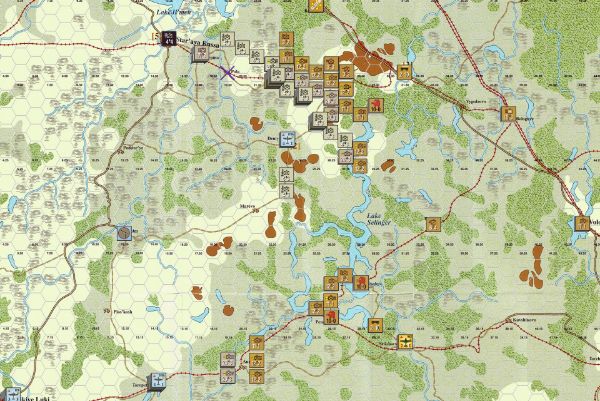 This turn ended up being a bit of a regrouping exercise, much of it due to the successful trainbusting campaign my opponent had last turn between 1st PZ and Rzhev. I got lots of the infantry close to the front to free up the mobile divisions to make a second push. I’ve decided to repair the Smolensk/Zemtsy/Nildovo rail line to ensure trace to the units going after Rzhev. It should take 5 turns, well before a freeze has a chance of killing some of my trucks. I hope to have the city before then.

I intend in putting Vyazma under pressure this turn from the West and North, and will have units from the south in place in a turn or two. Will he stand or run?

One thing I discovered is I am pretty used to having intact rail lines in most of the games I play. Extender use is kind of new to me. Also, I should be making better use of trainbusting myself, but I keep forgetting to do it. Hopefully I will learn. 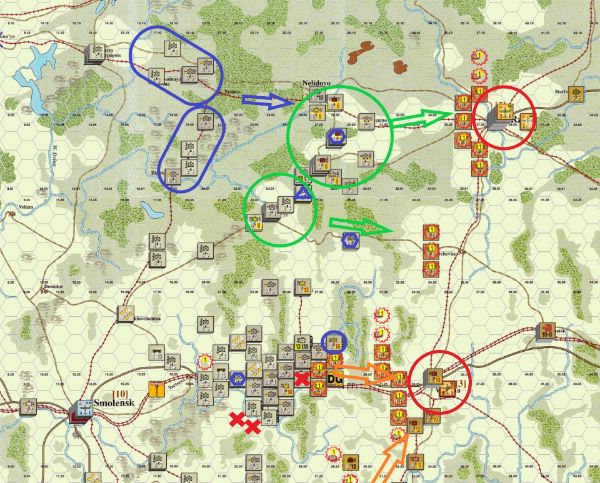 3) Spas Demyansk area – A key of what you are looking at. Red Circle – North – Vyazma Red Circle – East - Taluga Blue Ovals – From West to East – 11th PZ, 10th PZ, 2nd PZ Green Oval – 6 Inf division on to the rescue Blue Lines – Blocking Russian lines of advance Blue Triangle – Truck Extender and HQ OK, OK, I should have got rid of the Russian rifle division next to 11th PZ this turn, but I didn’t. Live and learn. My main goal this turn is to get 10th and 11th PZ on the move, across the river, and into to open to threaten Vyazma. I have enough infantry in the area to take over security of the supply lines, so no problem there. I am repairing the railroad to the North East and should be at Spas Demyansk in 4 turns to ensure trace supply for the advance towards Taluga. 2nd PZ gets a rest. I think their mere presence on top of Sukhinichi ensures the Russians won’t try anything. I should get infantry in the area next turn to then set them loose on the next target. I’m just not sure what my opponent will do with his forces around Bryansk. There are lots of units, so I will be interested to see how many he tries to break out in his turn.

I still have 3 mobile divisions in the area that haven’t moved yet, and with supply the way it is, not sure when they will. 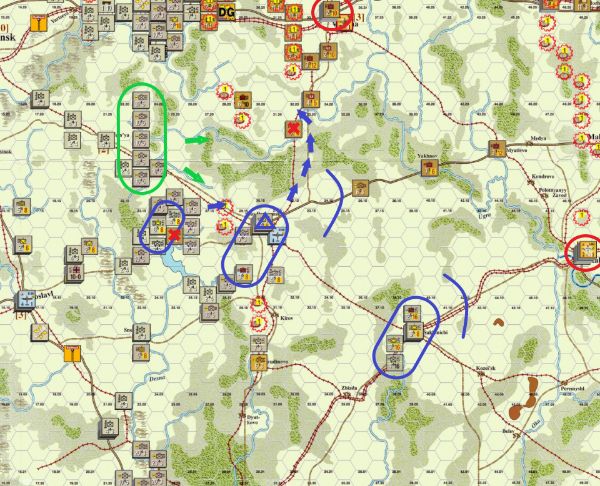 Bryansk is cut off from trace by rail. My opponent is in a bit of a pickle here.

Priorities in this sector: 1) Surround Orel and take airfield. Block reinforcements from Mtsensk. You all don’t have to tell me I should have taken Orel on turn one, I kick myself constantly about that. 2) 1st Cav take Karachev and block any move to reopen the rail line. 3) Take L’Gov and the airfield. 4) Try to use as little supply as possible for this move. 5) Get the infantry up!!

Moving SPs to the fighting units is a royal pain. I see no easy way to get rail trace to the area. Right now my repair unit is heading to L’Gov and will be there in 4 turns. I will have to see the situation from that point to figure out the best line to repair after that. 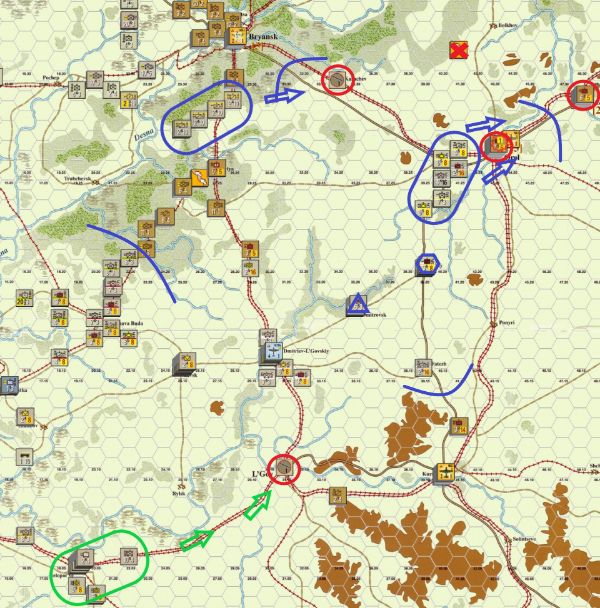 With as little supply as I have in the area, this sector is shaping up to be a tough one. Kharkov is the big prize and my opponent probably won’t give it up without a fight. My thought is to cut the rail lines around the city and starve him out.

The 60th Mtr is in a good position to cause the Russians problems and I don’t think my opponent knows where the division is at. I haven’t decided how to use it yet this turn. This turn I will move toward the airfield north of Kharkov and village Merefa just over the river south of Kharkov, hopefully putting the Russians moving along the road in danger.

The 13th, 14th, and 16th PZ are starved for fuel, and not yet sure when I can get them on the move. SS-W is in the same shape. The Italians have some cavalry, but not enough, so my plan with them all is to slowly push out and take territory. 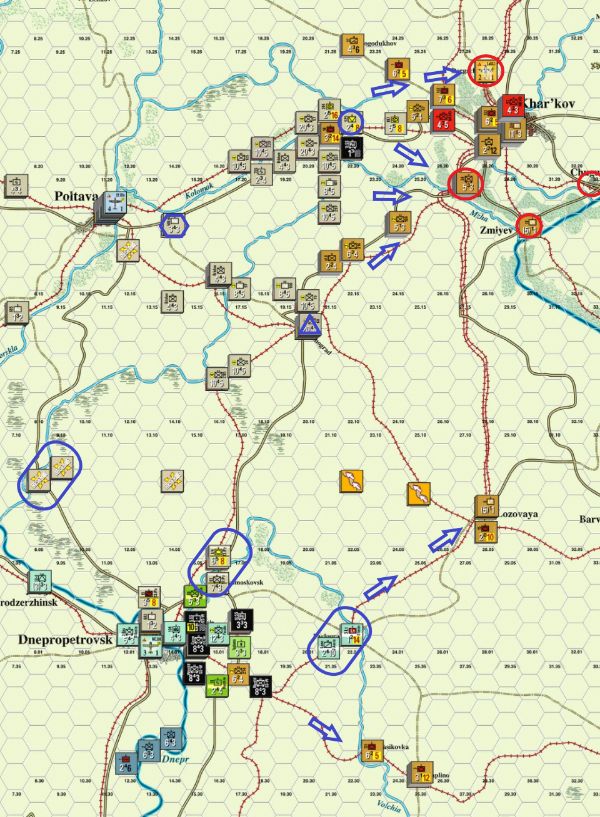 6) Crimea – Finally punched through the hog line. Cost me 2 infantry steps and 8T, but now my opponent will have to move. The rece is on to Sevastopol!

Limited supply and limited manpower will make this a challenge too, but now I am on the move. 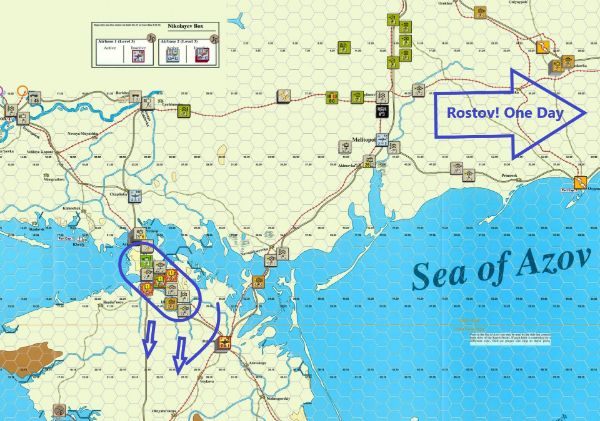 Kind of a pause due to weather and supply issues (when don’t I have those?) Weather for turn 3 is full flight, and I won initiative. After giving it some thought I decided to go first. There is a possibility of mud starting next turn, want to move as far I can before that happens, and I want to ensure I pocket more Russians, especially around Bryansk.

Finally, this AAR actually helps me play the game. I have to look at the situation again and really study the map.