My opponent, hereafter referred to as Jim (since that is his name and easier to type) won the initiative and decided to keep the hammer. At this point, going second isn’t a priority, so I am perfectly happy for him to keep it. This turned out to be more of a repositioning turn anyway.

My replacement roll was a lousy (5-1=4) so I got no replacements. The only silver lining is I didn’t roll one less and lose a truck. My supply roll was a 7, and with the 2 SP I received as reinforcements, I ended up with 15 SP this turn.

Forgive me for changing up colors/symbols on the maps. I’m trying to come up with some sort of standard way to show units and movement. I’ll get there eventually.

1) Velikiye Luki and North – Absolutely nothing going on. Jim seems a bit paranoid about the forces in the north and is leaving 18-20 infantry division and probably 10-12 steps of other stuff to make sure I stay there. Fine by me, it means those forces aren’t in front of my units in other sectors. 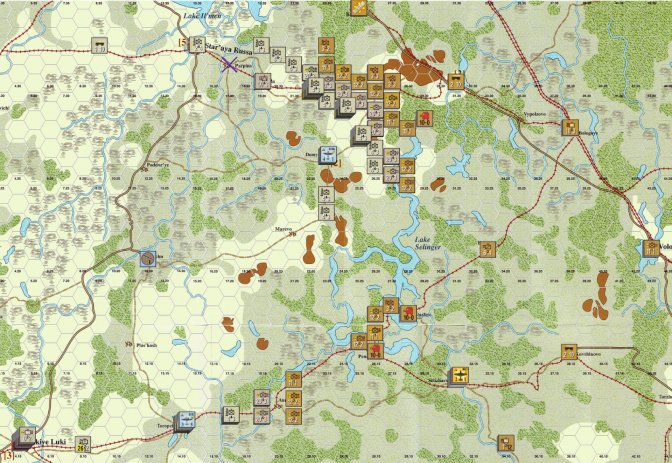 2) Rzhev Sector –This attack bogged down for two reasons. First, Jim hogged up and is going to make me work for every hex on the way to Rzhev, and second, supply is a problem without a detrainable hex in the near vicinity. I’m doing my best to take care of the supply issue, and will just have to figure out a way to make a hole is Jim’s line to surround Rzhev, which is the key to taking Kalinin. 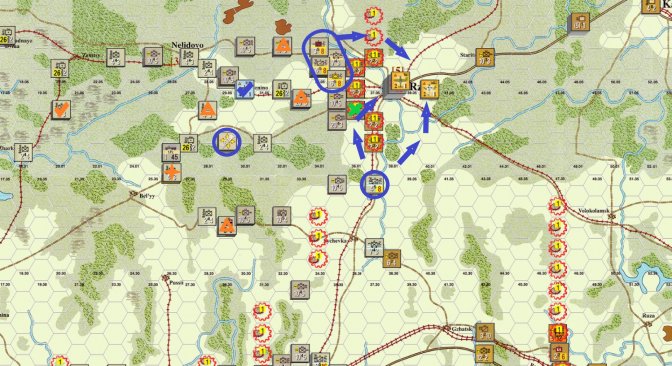 The Infantry has caught up to the front, which is critical. I’m hoping a hole in the hogline, in addition to a PZ division or two on the backside of Rzhev will collapse Jim’s defenses allowing me to head toward Kalinin.

There are 6-8 rifle division and 4-5 steps of other stuff in this pocket. Jim will likely get a goodly portion out via breakout, but not all. The bigger prize to me at this moment is the airfield right outside of Vyazma, which I sorely need to keep my army under air coverage.

I note the red X where Jim had placed a 6-2-5 armored brigade. It was out of supply, but still in the way of 10th and 11th PZ. I used a 7-5-7 Flampanzer battalion to attack and ended up getting a Ao1, DL1o1 result, which did not make me happy, but I will accept the loss to keep my army moving.

In addition to the mobile divisions, I have 9 infantry division in the traffic jam, which will all come in useful at the hogline. I expect Jim to start manning the Moscow hogs with a vengeance, so I have to pierce the line asap.

4) Bryansk Sector – Getting on the move to the north, major traffic jam to the south. 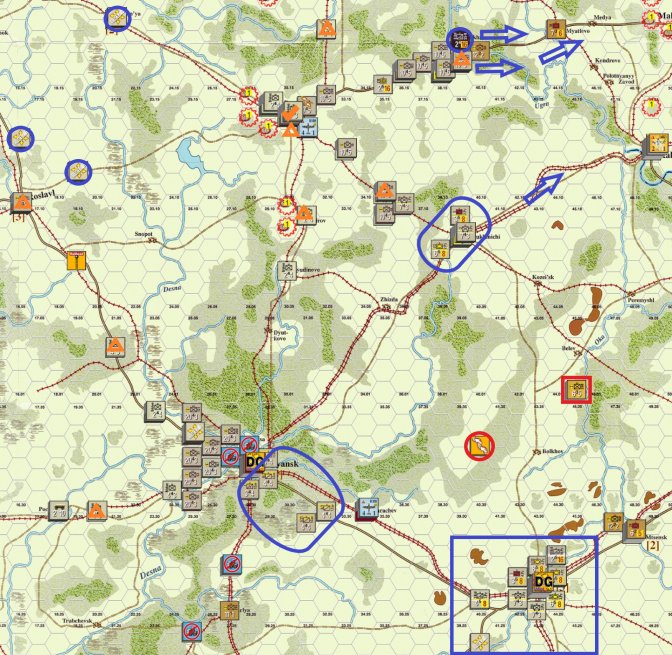 As I mentioned in the last picture, I have SS-R across the minor river right next to the secondary road towards Maloyaroslavets. My next move from here is race to get past the next river line to outflank Kaluga, and take at least grab a couple of hogs in front of Maloyaroslavets to get past the hogline. Plenty of infantry here to help out.

Jim, sneaky devil that he is, moved the cavalry unit in the red circle to that hex last turn. Knowing that you can’t be in strat mode and not be in trace, I am sure that there is a HQ in the hex with the red square. If so, Jim will be able to attempt breakout with all but one unit from the Bryansk pocket this turn. The only question will be is how many units will he leave in the pocket to take their chances and slow me up.

Finally, I have no idea when I will ever be able to move the 5 motorized divisions behind the lines. They will likely sit there with reserve markers on them for some time. 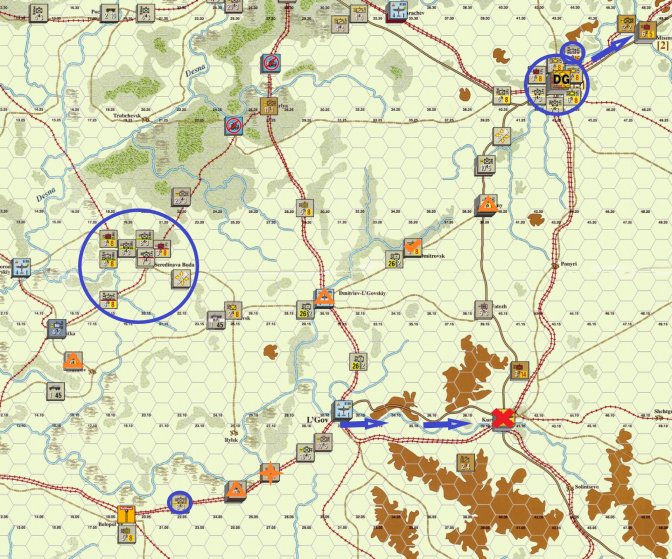 I counted out the turns and the distance to various detrainable hexes and discovered that I have to take Kursk before November 1. I have enough infantry to do it, but will move up 17th PZ to help. Once I take the city and repair the rail road, my supply is in much better shape for the move towards Moscow.

Orel is going to be a major pain, but it will fall eventually.

6) Kharkov Sector – What a slog. Jim is going to put up a fight, and I don’t want to take the losses, so rethinking a bit. 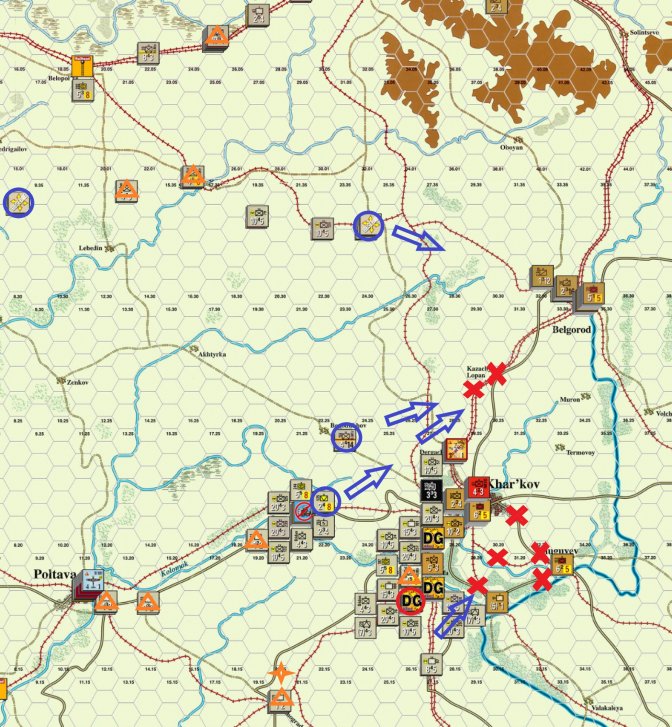 I have decided that my original strategy of cutting the railroads to Kharkov is sound, but have decided not to go for the cities to do it. Jim can’t protect all of the hexes, and I will just jump on the low hanging fruit. Once the city is cut from trace, he will have to react. I can’t do this in one turn, so he will see what I will be attempting. His reaction will be interesting. This will also get my motorized division on the move and useful once again.

7) Dnepropetrovsk and South Sector – Got a HQ in position so I can move some formations forward. 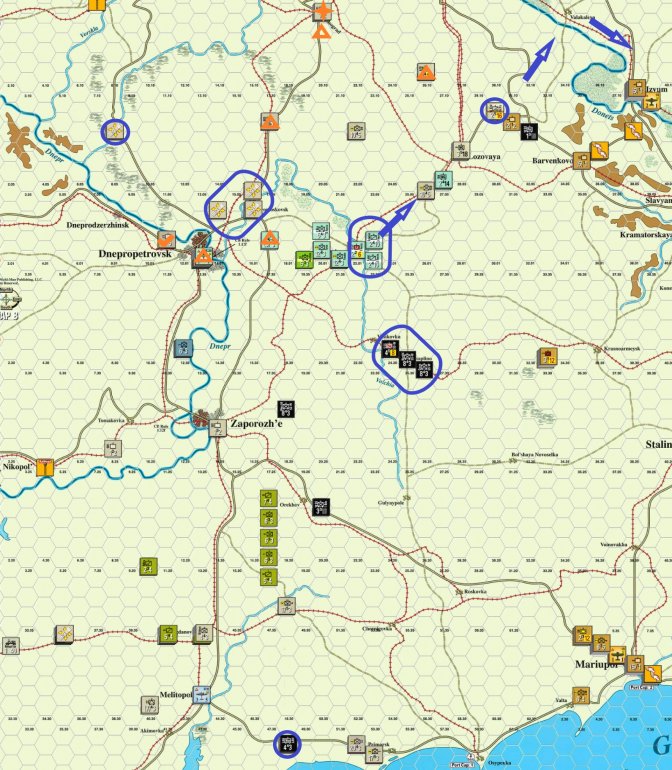 I want to get over the Donets quickly to make Jim nervous about Izyum. Also, getting a PZ in that position will assist in taking Kharkov. Now I just need the other two PZ divisions to start moving.

I will only repair the rail road to Dnepropetrovsk city center, then move it back north to assist in completing the net to advance on Moscow. It won’t be until after the beginning of November before I start repairing any of the railroads in the south.

8) Crimea Sector – This area will go quiet soon. I will move as far as I can and then sit for a while until I can get my supply net expanded. 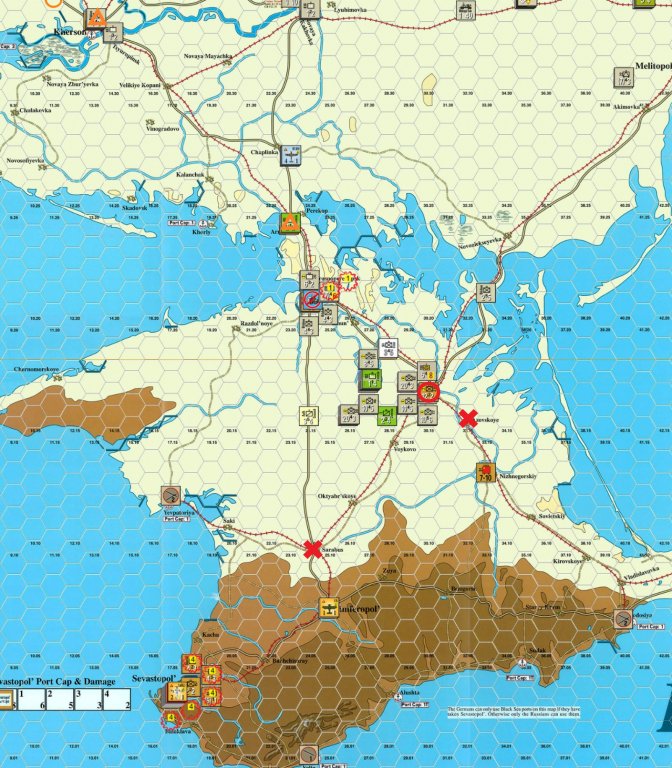 One of my big concerns right now is getting rail lines repaired so I can remove the truck extenders before freezing occurs. The first time it could happen is 1 November. I should be able to do it, but it will be close.