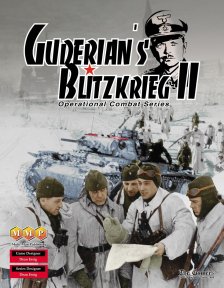 GBII models Army Group Center during the swing period of WW2 in the East. This game covers the action from its predecessor Guderian’s Blitzkrieg (1992), the first OCS game, and adds all the action from Lake Ilmen south to Voronezh from Oct. 41 and the last drives of Barbarossa until the Spring of 1943 and the preparations for Kursk. The game covers in great detail all the operations from October 1941 until May 1943 on a large play area extending from Voronezh to Kursk. It is designed to be played both separately or linked to Case Blue. The monster linked game allows players to run operations on the entire Eastern Front (except for Leningrad) from the fall of 1941 until mid-1943. Multiple scenarios (one map to very large) allow play to be picked up at various key points in the campaign.