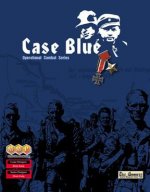 Once Guderian had turned back from Kiev, orders were issued for what was assumed to be the end of the campaign in the East. The Germans assumed that one more push would knock the Russians out of the war.

As Army Group Center makes a final drive to Moscow in 1941, your Army Group South is to support that offensive by continuing the advance toward Rostov. Good luck, as you will not get much support. You must make due with what you have.