Jim didn’t do a lot directly in front of me, most of his was behind the lines, moving up reinforcements and starting to man the Moscow hogs. His attrition rolls were poor, and most of the units behind my lines disappeared.

Please click on the pictures for a synopsis for each sector. Since the graphics of the situation looks very close to what it was at the middle of the turn, so I will only post the sectors that had significant changes.

1) Vyazma Sector – Breakthrough almost complete, just a few Russian holdouts that will starve soon. The units that were on both Vyazma itself and the airfield next to the city disappeared, so I can start flying from there this turn. With the mud next turn, I will probably make this a repositioning turn to get as far forward as I can in hopes of dry weather in the near future.

Jim lost 3-5 inf and 2-4 mech steps here due to attrition, and has 4-6 inf and 2-3 mech steps less in the two hexes he still holds. Hopefully they will go away next turn. After this, another hog line to pierce. Ouch. 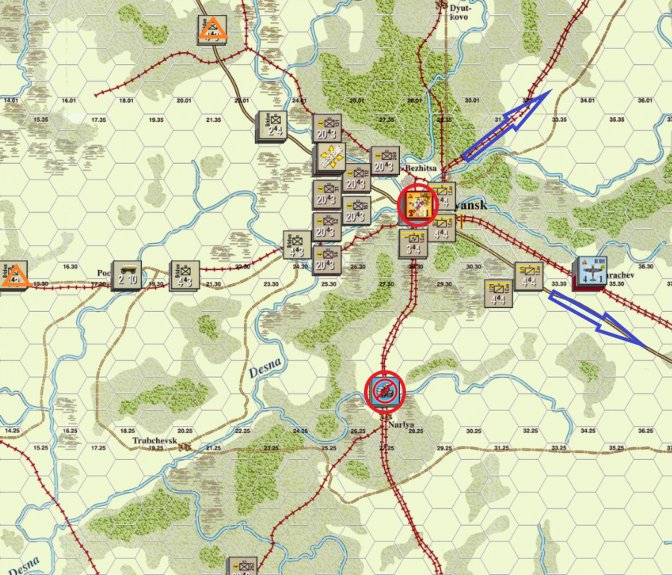 The lone rifle division in the south will likely go away next turn, leaving me Bryansk. Jim has supplies in the city, just don’t know how much. I will probably use 1st Calvary division to if I need to assault as they go away on November 1st anyway. I would like the city soon for the train unit.

Jim lost 8 inf steps due to attrition this turn. I know that the division to the south is 2 steps, and I believe there are about 5 steps of infantry in Bryansk.

3) Kharkov Sector – The grind continues. Jim saw me coming and took measures to thwart my flanking moves, plus the weather roll for next turn did not help. I will just have to be methodical and about taking this city, but I will take it.

Jim lost 1 inf step due to attrition at the OOS marker, leaving 1 mech step in the hex, plus 1 inf step, maybe 2. 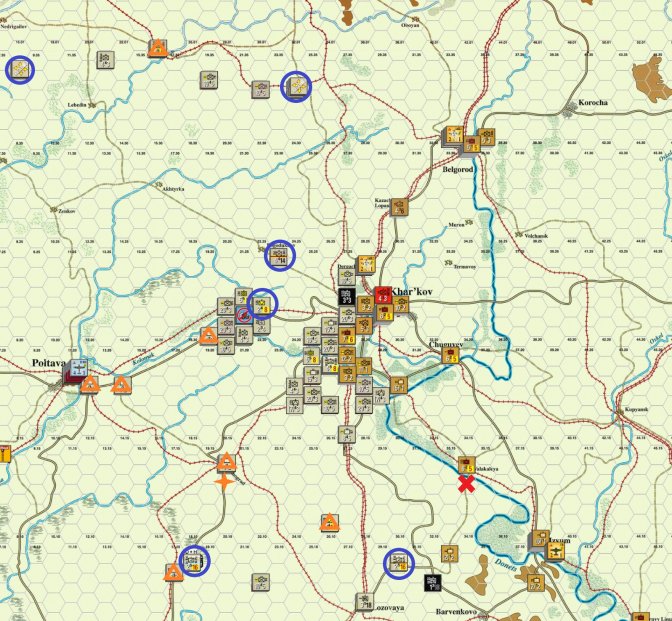 16th PZ is fueled, but with mud, it won’t be able to do what I hoped. The original plan was to move 4 hexes with the HQ right next to it and then during the exploit phase move to the position of the X. ON the next turn I planned on taking 14th PZ and moving across the river. Unfortunately, I’ll have to rethink this one.

As you can see below, mud will make its appearance next turn. I need at least one more turn of dry for all my plans to come to fruition, so I am now at the mercy of the weather. Also, the mobile divisions I pre-fueled this turn are in the middle of the steppe, without a decent road. I will just have to move them as far as I can.

My losses have been very light to this point, but it makes me dread the freeze even more. My army will look nothing like this when the cold weather comes.

For turn 5, light mud, normal flight, and I lost the initiative roll again. Jim tells me to go first.