The situation at the end of the October 19 Axis move for the full Guderian’s Blitzkireg II/Case Blue Campaign October 1, 1941 start.

I will only post one report for this turn as this is the second consecutive of light mud. I won initiative and decided to go second. Not a lot going on as the mud slows up Jim even more than me, but the overall effects are more detrimental to the Axis forces. Jim is manning the Moscow hog line with a vengeance and I can see I will be having some real fun getting through it.

1) Rzhev/Vyazma Sector – A second turn of little movement. Jim attacked an infantry division that was in the location of the red X on the map and killed two steps, taking no losses himself. I think it cost him about 2SP for that attack, but he is much more able to burn the supply than I am. Other than that, just trying to get the RR repair units up the line so I can move my HQ’s up also. Additionally, I will be able to remove the truck extender next turn.

I built up the airfield next to Vyazma to a level 2 so I could base some Stuka’s there for my eventual assault on the hog line. Still not sure where I will attempt to break through. Map Key : Orange Checkmarks – RR Repair units Orange Triangles – HQs Orange Star – Truck extender Blue Ovals/Circles – North to South – 1st PZ, 14th Mtr, 7th PZ, 6th PZ, 11th PZ, 36th Mtr, 10th PZ Red X – Site of Russian counter/spoiling attack Blue arrows – Mobile division lines of advance ? 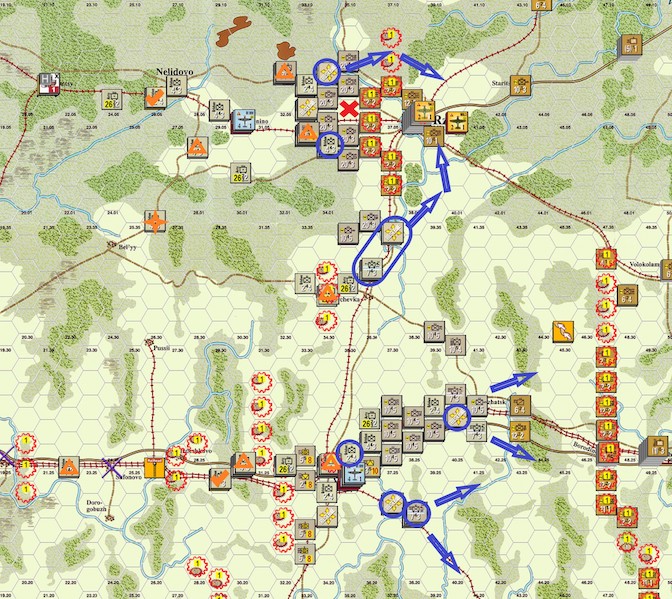 2) Kursk/Belgorod/Kharkov Sector – Mainly repositioning my forces in hopes of good weather, and trying to cut down on supply usage. Kharkov will be a tough nut to crack, and looks like Kursk and Belgorod will be too. I have to get some wagon extender out in the steppe to continue movement east, and until then, the advances will be limited.

IN another turn or two I will have the rail line repaired to the village north of L’Gov and a wagon extender to the east of that hex so I can remove the truck extender now in place. 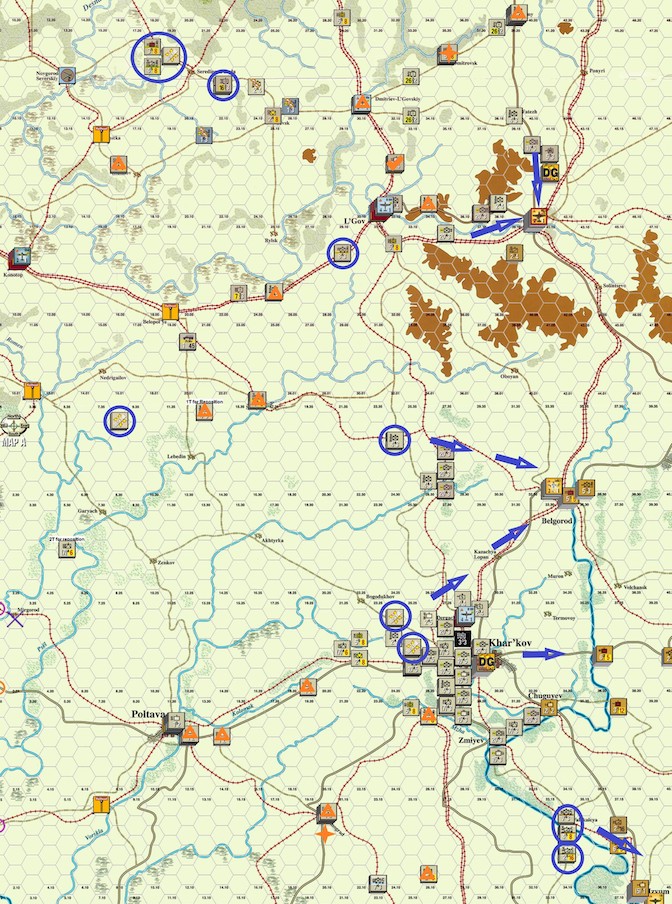 My losses this turn a bit heavier (3 inf steps, 2 from the Russian attack near Rzhev, and 2 mech steps) with the attacks I have been making, but I took Bryansk (finally) and Orel is about to fall.

The weather rolls have not been in my favor as turn 7 is a full mud turn with full flight. I lost initiative and Jim is giving me a double turn, not that I will be able to take advantage of it. I expect even less movement next turn than this one.