The situation at the end of the October 15 Russian move for the full Guderian’s Blitzkireg II/Case Blue Campaign October 1, 1941 start.

As expected, the light mud slowed Jim down as well as me. I am beginning to see the areas he feels are important, and have to come up to counters for his troop concentrations. His manning of the Moscow hog line has picked up. He has also started to pull units out of the line in the far north, which would imply he is running short of steps to man the front elsewhere. Jim’s attrition rolls were poor again (except for Orel, curse that city anyway). I also made a couple of blunders, but hey, that’s why we play the game !

1) Rzhev/Vyazma Sector – Mud is now a big factor. I will have to stay on the roads and trails to make significant progress, and trucks are next to useless, but cross country is still a better option than trying to bull my way through the center of Jim’s line. Jim is also very concerned about Rzhev, and committing considerable resources to slow me up, as evidenced by the DG markers on my infantry divisions. 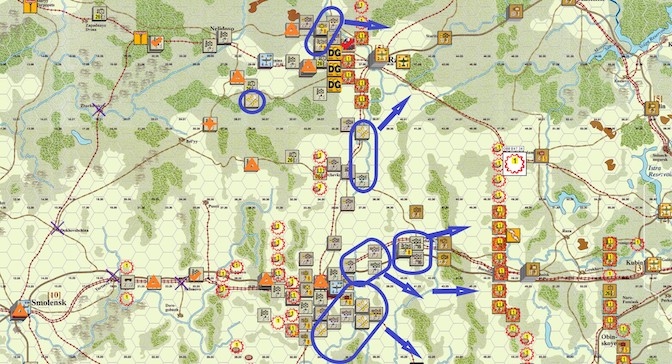 Jim was able to abort and reduce my fighter rear Rzhev (hey, it happens) and DG’d the two southern infantry divisions using aircraft. The northernmost one was DG’d via artillery barrage. I appreciate the use of resources on those units, though my plan was not to do a frontal assault, I’d much rather go around.

Because I have difficulty understanding rules no matter how many times I read them, I left a hex open for a breakout and 1 infantry step was able to escape. The 3 Russian steps next to the airfield all gratefully surrendered to their new German overlords and marched to captivity. This cleared out the secondary road and railroad past Vyazma. Lots of choices open to me, but weather will likely continue to be a problem.

2) Kharkov Sector – Jim took me by surprise and pulled the majority of his troops out of Kharkov. I believe he will leave a goodly amount, including supply, in the middle of the city to cut the railroad and the secondary road that goes through the city for as long as possible. This will tie ups troops for the short term and make it more difficult to move on Belgorod and Izyum. These mini fortresses are a pain, I will admit. 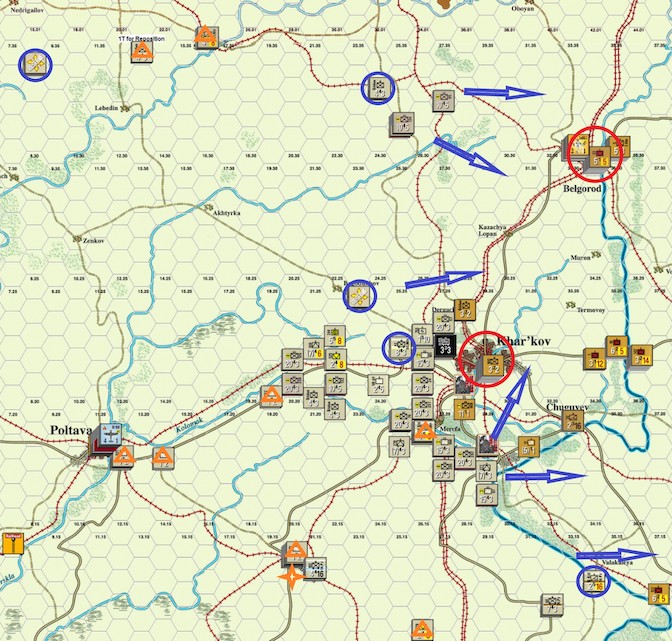 The mud does have its good points in that I actually make up my supply deficit from the first 4 turns. With the completion of Turn 5, I am only 10.5 SP less than when I started the game.

My losses this turn were again very light, only 1 fighter and 1 bomber step. The Russian losses are slowing down, but still much greater than mine, and way more than what he is getting in reinforcements and replacements.

For turn 6, light mud (again, oh joy), limited flight. I won the initiative and I let Jim go first. Hopefully I will still have the hammer when weather is not so disadvantageous to me.