The situation at the end of the October 29 Axis move for the full Guderian’s Blitzkireg II/Case Blue Campaign October 1, 1941 start.

Since Turn 8 for October 26 was another full mud turn, and pretty much nothing happened except for movement in the background, I will move on to Turn 9, October 29. For a change the weather was dry, but flight was limited. I won initiative and decided to go first again (not a double move) since I don’t want Jim to take advantage of the dry weather before I have a chance to make him miserable. Also, since starting in November there will be no chance for dry weather in the north, this may be my last best chance to get into position and attack with my army still somewhat intact before I have to roll for frostbite, trucks, and yellow symbol units.

With the 4 consecutive turns of mud I was able improve my supply situation and started this turn with 2SP more than I started the game with, before my supply roll, which was a 5. With the addition of 2SP I received as reinforcements, I got 13SP this turn, which will have to do.

Almost all my supply was spent on movement, mainly to ensure all my HQ’s were placed to help my advance, and moving mobile divisions to positions where I can take advantage of a breakthrough. I was also able to move elements of the 5 mobile divisions in the deep rear that have been sitting in one spot the entire game to this point. Finally, I built a new airbase and expanded another.

1) Rzhev/Vyazma/Kaluga Sector – Rzhev is where the action is this turn. The northernmost HQ (Orange Triangle) is right next to the minor river, thus negating the extra movement points I would normally have to spend and extending the throw range of the HQ. The HQ can throw to the hex pointed out by the orange arrow.

I moved 1st PZ north of Rzev and elements are now east of the city. All the units are in combat mode. 2SP are sitting in the hex pointed at by the orange arrow, since I will have 4 units that will have to eat off the map until I get a trace supply to them.

Additionally, 7th PZ closed from the south, and I now have Rzhev in a lose pocket. Jim has at least 9 rifle divisions defending the city, and I am hoping he will decide to fall back to Rzhev itself. This move is a gamble, but for me to keep moving east I have to take some risks.

I attacked his units right in front of Borodino, but my real goal is to get Jim worried so he will freeze his units in place rather than send them north. I made it look like this would be a main line of advance, and hoping he buys it.

Further south I am keeping the pressure up, but still need another turn before my supply network is in shape to really move again. Finally got my railroads repaired far enough that I could collapse my Truck extenders.

2) Orel/Kursk Sector – Repositioning as much as humanly possible in anticipation of starting east again. I have two RR Repair units working overtime to get the double rail lines up and operational. The line to Kursk will be completed in two turns, so I can start bringing reinforcements there after that, making my transportation situation much improved. 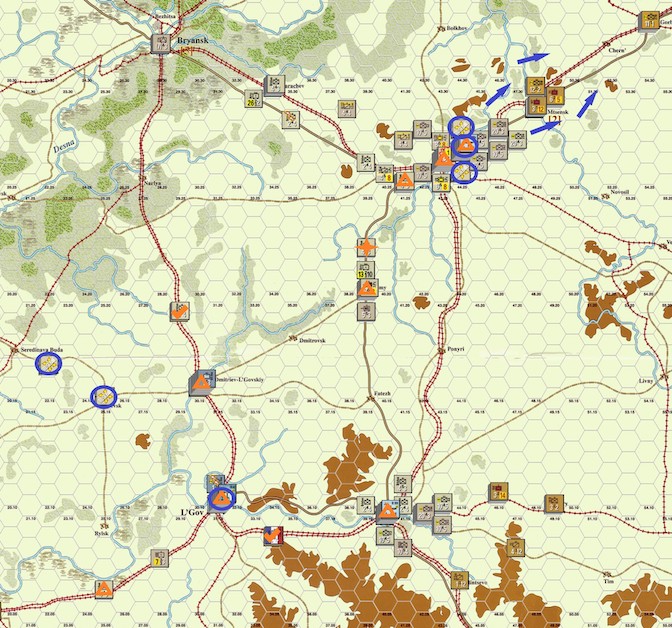 3) Belgorod/Kharkov Sector – The reduction of Kharkov went much better than planned due to inflicting 2 step losses from barrages. I did attack the remaining 2 steps, and was able to destroy another (at a cost of 2 infantry steps by my forces). Jim is down to one step, and I should take it out this next turn.

Note the 3 wagon extenders, the only thing keeping me moving right now. I don’t foresee moving a RR repair unit to this area for at least 2 more turns as the north is much more critical right now.

I have the Italians on the move, and will be targeting Izyum with them and German mobile divisions in the next turn or two. 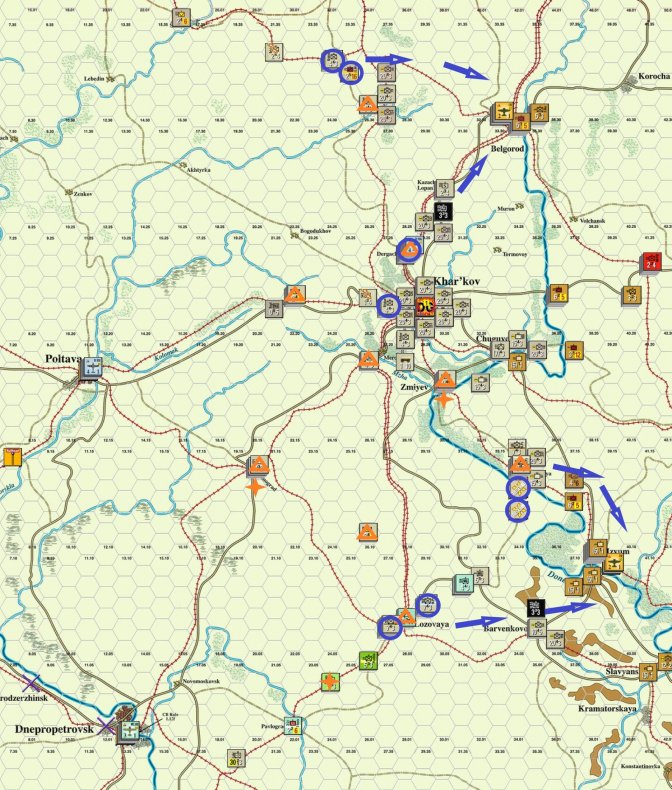 4) Crimea Sector – At the very limit of my supply network, but I will move into positions outside of Sevastopol and towards the strait of Kerch as I dribble in reinforcements. This will be more a long term project that I don’t expect to get really ramped up until spring. 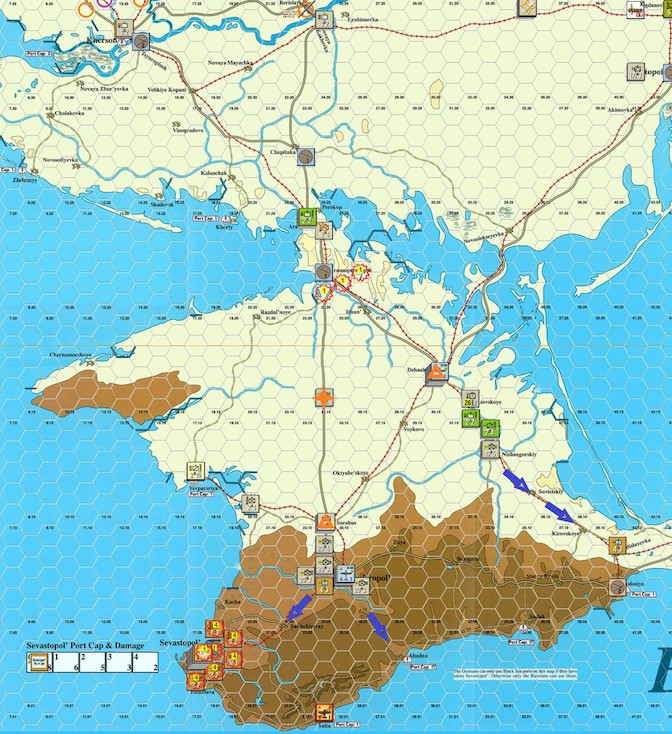 Let’s see how Jim responds to this.