The Russians won initiative after turn 1 and chose to go first. Here is the situation at the end of my opponents turn, 5 October, 1941.

1) Velikiye Luki and north – Lots of fishing and deer hunting going on. A quiet sector that my opponent is willing to leave that way. 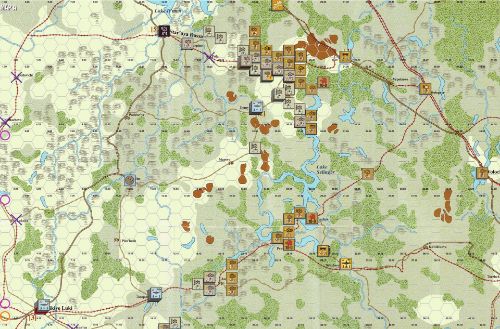 2) Smolensk area – The Russians continue to bug out and look to be setting up defenses around Rzhev and Vyazma (Red Ovals). My opponent used his air force wisely and did some trainbusting on front of Rzhev (Green Checkmarks) to slow me down. It is obvious to me that my opponent is enticing me to attack the two units in strat mode to the south (Blue Circle) at odds of what, a billion to one? The only reason for that is to make me use up 2T of supply. I will likely oblige him, as they are both full sized rifle divisions. The more I kill, the less in front of me. My biggest annoyance are the units blocking the road in front of Vyazma (Blue Square). It is a fairly hefty stack and I really don’t know what is in it, but they have to go. 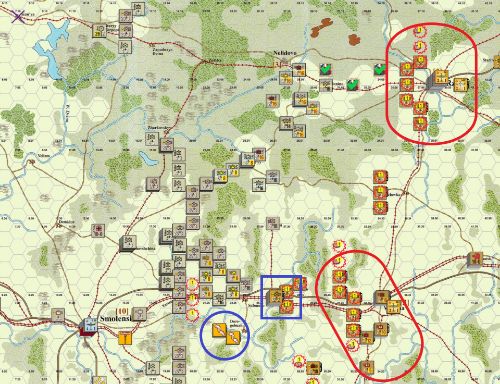 3) Roslavl area – A bit surprised my opponent didn’t at least try to defend Sukhinichi (Red Circle) as that rail line is critical to keep for Bryansk in trace supply. Fine with me, it will make my move by the 2nd Pz easier to pull off. He did a bit of trainbusting (Green Checkmark) to the north of Spas Demyansk to slow any advance towards Vyazma and/or Taluga. The rifle division in the middle of 11th Pz (Red X) is annoying to the extreme, and since he is still there, he must have some supply with it. Sigh. My infantry keeps pushing forward in all directions. 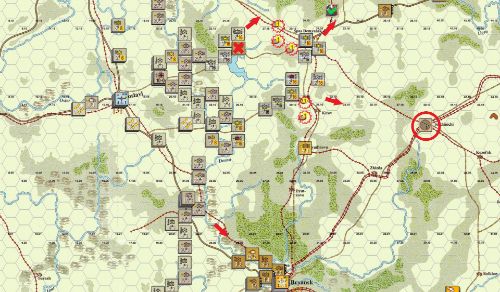 4) Guderian’s Blitzkrieg – My opponent is going all out to get his forces to Bryansk. If my forces to the SW had gas, it wouldn’t work, but they don’t. Decided to move the 1st Cavalry (Blue Oval to north) cross country during the exploit phase to get into position to take Karachev the next turn. Don’t believe my opponent will expect that.

As for the rest of the map, lots of empty space and limited supply to take advantage of it. My opponent is trying to turn both Orel (Red Circle) and Mtsenk into fortresses, causing me to kick myself again for not taking them on the first move. I will now have to take them the hard way. My plan is for 4th Pz (Blue Circle) to leapfrog over 18th Pz to take up positions around Orel. The 3rd Pz (Orange Oval) will move to cut the Orel/Bryansk Railroad and assist 4th Pz. Various other units to the south (Green Circle) will move to take L’Gov. The infantry will keep trying to keep up. 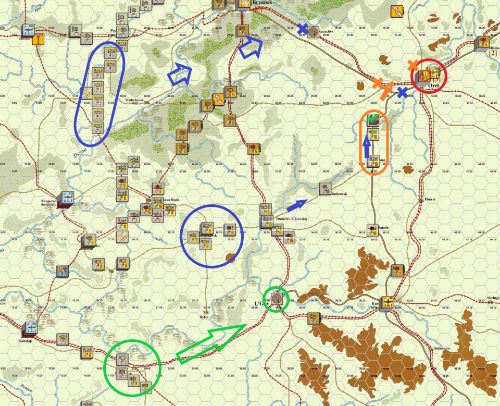 5) Kharkov and Dnepropetrovsk – General retreat by the Russians, and it looks like they will make stand at Kharkov. This will be an infantry struggle as I am severely limited in supply. As for the forces around Dnepropetrovsk, I will continue to move them East and Southeast as long as I have fuel and can stay in trace. Likely will not be able to make a big move until I can put a railroad bridge across the Dnepr. 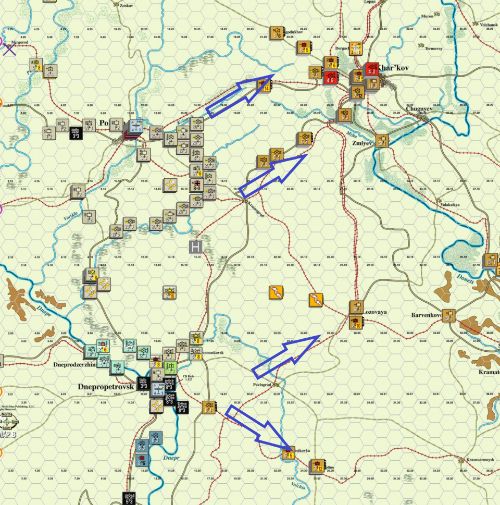 6) Crimea – The Russians are running so fast it is impossible to keep up! What can I say? I’ve got to punch through the hog line (Red Circle) as soon as possible and move towards Sevastopol. Supply will be a problem, as will men. On the other hand, a clear shot to Rostov. I should be there by the end of the month 😊 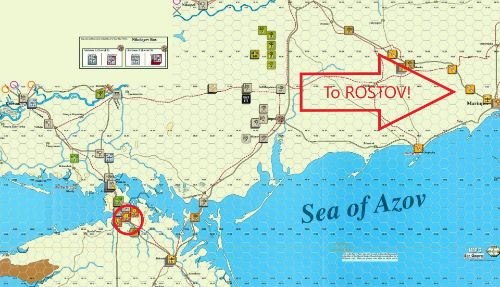 This turn didn’t turn out as bad as I feared since it looks like the Russians are in bad shape. I’m up, so let’s see what happens.