The situation at the end of the October 15 Axis move for the full Guderian’s Blitzkireg II/Case Blue Campaign October 1, 1941 start.

Light Mud was on the menu for this turn. It caused me to pump the brakes, and I can see that a full Mud turn will likely bring my army to a stop. On the other hand, I am beginning to correct the SP deficit of the last 4 turns. More SP is a good thing 😊

My replacement roll was a 10, which turns into a 9, so not bad. I was able to bring back my destroyed Ju-88 and the panzer grenadier regiment from 1st PZ. My supply roll was also 10, bringing me 15 SP.

I received 12 Panje wagons this turn due to the mud. I have plans for them !

Please click on the pictures for a synopsis for each sector. I have decided to only post graphics to sectors that had significant movement/action. 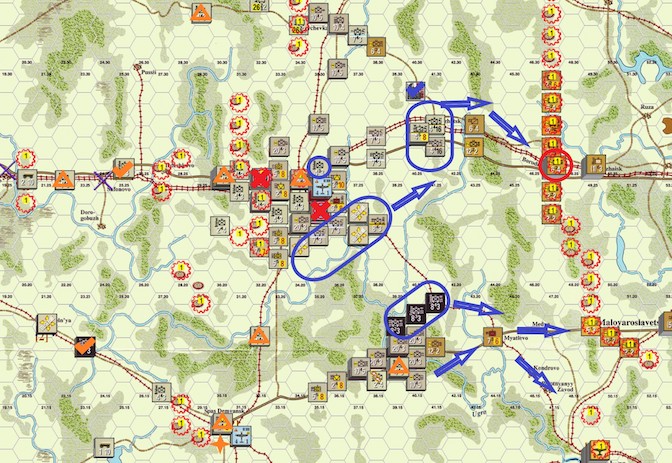 I will splurge next turn and build up the airfield just south of Vyazma so I can rebase some of my air force. The RR repair unit to the north will make it to Vyazma in 3 turns, and the one to the south will get to Spas Demyansk in two, so I can remove the extender.

I hope to trap and kill the cavalry division to the north, though I realize that probably won’t happen. At least I made his path to safety more torturous.

SS-R took out a tank brigade during the exploit phase, effectively outflanking the units on the road to Maloy(lots of other letters). Let’s see what happens next turn.

2) Bryansk/Orel Sector – Jim has between from 3-4 RE in Bryansk, and 4-5 RE in Orel, together with an unknown amount of supply in each city. I was able to take out 1 step via barrage this turn from Orel, but I have to keep moving and can’t wait forever to clear them both. Also, Jim built a Hog in Orel, making the process more difficult. I will probably start assaulting Bryansk next turn, but still have to move more infantry up to begin the process on Orel. Assaults will also make Jim burn supply faster. 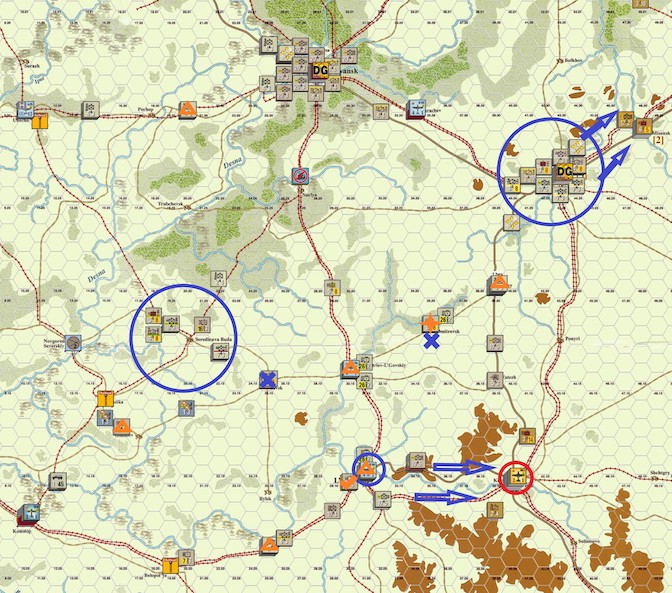 Once I start the assault on Bryansk I plan to use 1st Cavalry as lead since they go away at the beginning of November. Gamey ? Maybe, but the horse soldiers want glory too !

My infantry divisions are just now getting around Bryansk. I only have 1 near Orel, and really need at least one more.

It is obvious that Jim intends to make me fight for Kursk. I should be next to the town next turn, but it will likely turn into another siege. I really need the hex for the railroad connections.

I will have my wagon extenders in place in 3 turns so shouldn’t have to worry about truck losses quite as much when the freeze comes. The Panje wagons do come in handy !

Getting the divisions in the backfield up to the front is still a challenge.

3) Kharkov Sector – Making slow progress, and I really can’t blame it on mud. My goal now is to surround Kharkov by early November, though I’m sure Jim will make it very tough to take the city completely out.

I killed 3 inf and 1 mech step due to combat this turn, and hope attrition takes out the last surrounded step this turn. 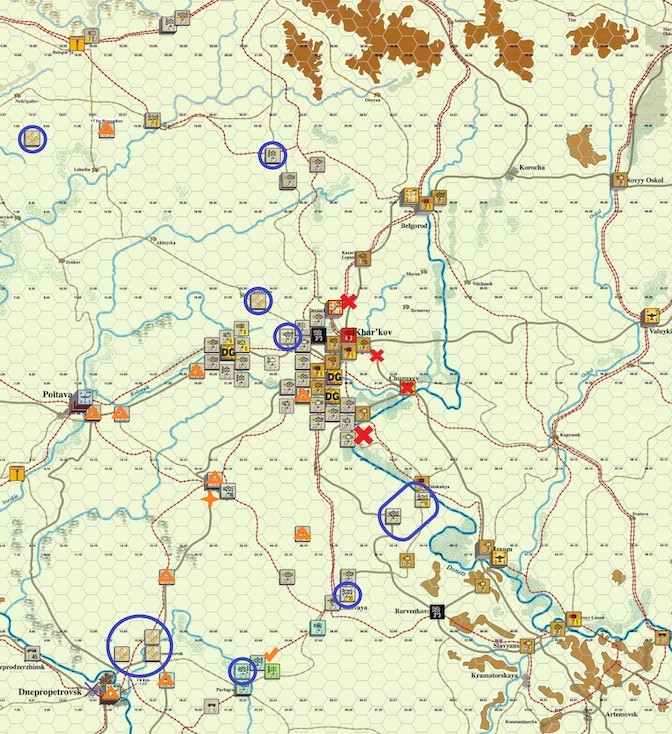 I am next to the Donets in two places and intend to cross the river at the large X to the south next turn and will be able to do the same thing next to the 16th PZ the turn after. This should put Izyum in dancer and make Jim respond. He really doesn’t have enough units to hold everywhere. Belgorod is a problem, but I don’t have enough resources to close on the city yet.

Once I get the wagon extender set up, I can start moving the Italians and all my other miscellaneous units east. I want a firm position on the east side of the Donets before winter sets in.

4) Crimea Sector - Finally cleared out the last of the OOS units and began general movement of my army toward Sevastopol. Not likely I will be able to actually take the city, but I can surround it and make sure Jim can’t use it as a conduit for general reinforcements. 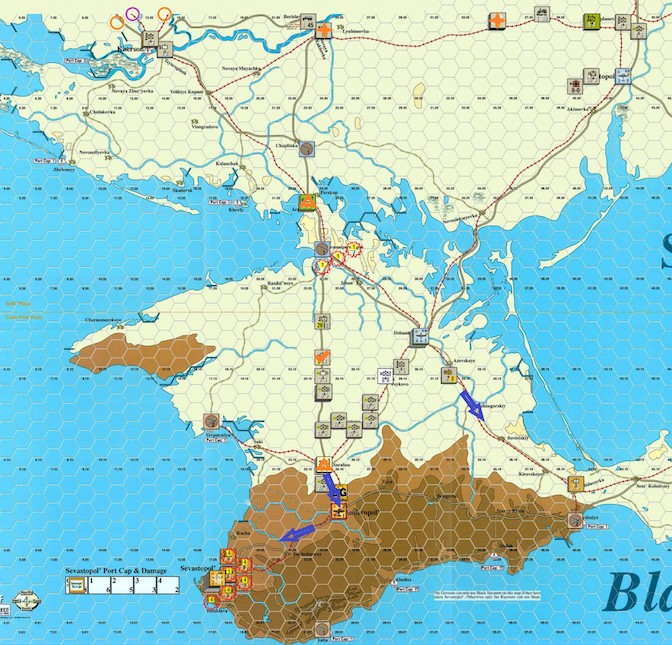 Unsurprisingly, supply is a problem, and this sector is going to become even more of a backwater. It will take some time to build up and advance on Sevastopol.

Mud did really slow me down. I am hoping for a turn or more of clear weather before full on mud makes its appearance and stops me completely.

I blew it by not planning for wagon extenders two turns ago, but it won’t be a show stopper. I will be able to remove all my truck extenders before the first freeze, so those shouldn’t be a problem. What is really holding me up is lack of RR Repair units, but I will have to make do.

Orel keeps haunting me, and I expect the same treatment at Kursk and Mtensk. All I can do is go around the cities and reduce them as quickly as possible.

I am very happy about my light losses, but I will make up for that as soon as the freeze hits. Oh well.

Finally, this is the first turn where I have used less supply than what I have received through the supply table. I don’t expect Jim to counterattack anywhere, and if not, for the first 5 turns I will only have 10 less SP on the map than what the set up called for. I watch those numbers very closely.