The situation at the end of the October 22 Russian move for the full Guderian’s Blitzkireg II/Case Blue Campaign October 1, 1941 start.

Another turn with only one report since this is the third consecutive turn of mud, and the first turn of full mud. Jim won initiative and gave me a double turn (why not ?). My army is not completely stopped, but even with strat moves and using all my reserve markers, most of my units didn’t get very far. Breakthroughs with exploitation pretty much out of the question. On the positive side, I didn’t burn much supply and it does give me a chance to reposition some units.

1) Rzhev/Vyazma Sector – Turn 3 of immobility. Full mud only allows me to repair two hexes of rail line per turn rather than 4, so I can’t reposition my norther repair unit until next turn. Most of the move was setting up for when the mud goes away. I was able to get rid of the northern truck extender this turn, and I will collapse the southern one next.

Jim is manning up the hogs, has put a level 2 hog in Rzhev and collecting units for a reserve. The job will not be easy in November, especially after frostbite and engine freeze really hits me. Nevertheless, I have to move as far as I can to the east and continue to kill as many units as possible before December and the likely massive assault that will occur then. 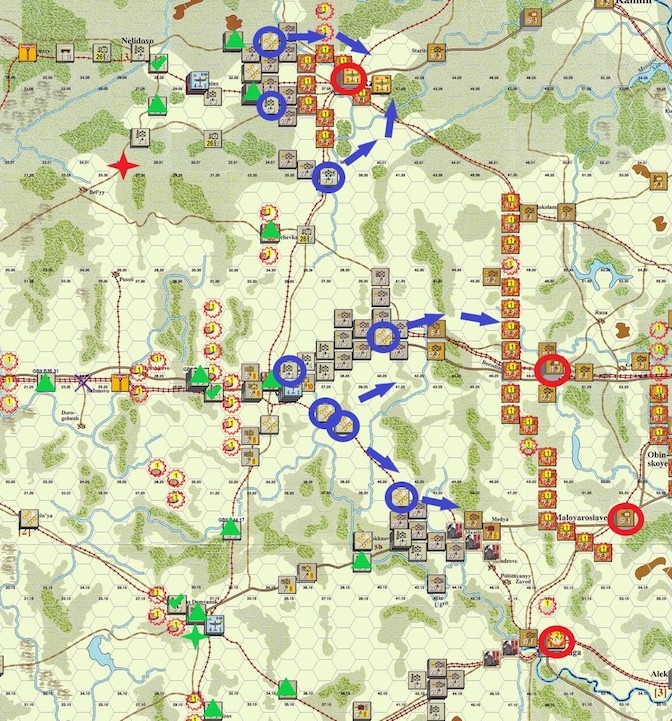 2) Kursk/Belgorod/Kharkov Sector – Jim took me by surprise, in a good way. During my move I attacked Kursk (Red X) and even though my combat roll was below average, was able to kill the only combat unit in the hex with a DL1 result. Since my result was an Ao1, I decided to retreat and wait until the next turn to take the village. Looks like Jim decided that it wouldn’t be worth the cost to try to hold out and he bugged out. I’m not at all displeased.

Kharkov, on the other hand is a different matter. From my barrages into the hex, I know he has between 3-4RE in the city hex he holds, and a level 2 hog. This may take some work (and supply) to force him out of there.

I have a bunch of mobile divisions and some assorted other units sitting in the middle of the steppe, but I will not supply them for movement until I am able to get them out in one turn. I am not a big fan of Mud 😊

Once the weather gets better, I will continue my drive to the east. 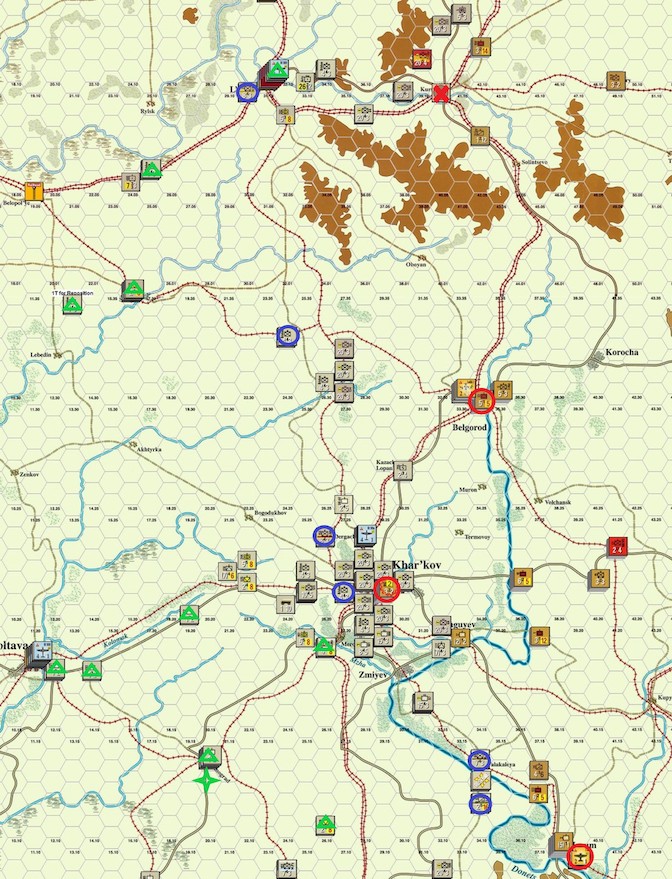 My losses this turn very light, but so were Jim’s. I took Orel this turn, but that was pretty much preordained, as I was attacking a lone NKVD Border unit. Since this was full mud, I added 16 more Panje wagons (that’s the last of them), and my supply usage was pretty minimal. At the end of this turn, I am only 4SP below the supplies I had on the map at the start of the game.

The weather roll for next turn is again a full mud turn with full flight. This makes 4 turns in a row with mud, 2 of them consecutive full mud. Jim won initiative and is “letting” me go first.